Trump’s toxic budget and fighting for the people’s health 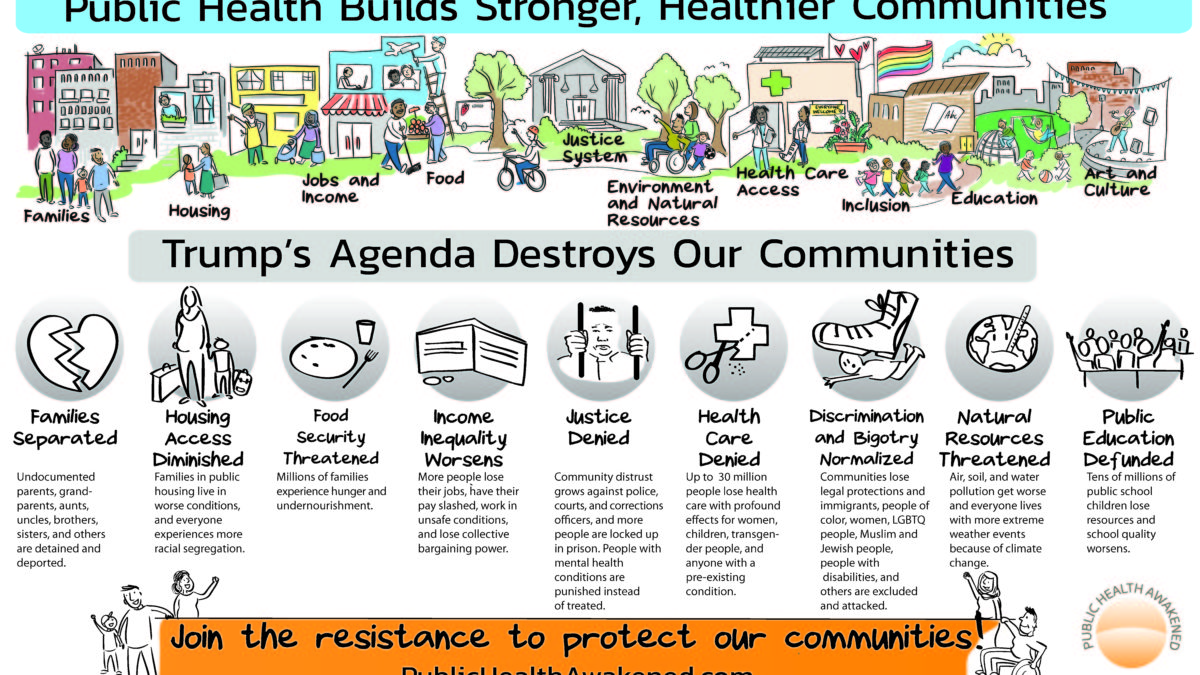 Follow the money. This old adage could not be more true now, as applied to the Trump Administration’s budget, released on March 16, 2017.1
This cruel and greedy document (in so many ways) 2–6 savages everything that we in public health and so many others know is necessary for people, communities, and our planet to thrive.7–9

The contrast could not be more clear — as achingly drawn in the new infographic below(released by Public Health Awakened 10), which vividly contrasts the wonderful ingredients that mix and meld to generate healthy and vibrant communities with how Trump’s toxic agenda poisons these possibilities. There can be no mincing of words: the Trump Administration’s proposed budget is certain to harm people’s health and magnify health inequities, in the US and globally.2,3,6,11,12 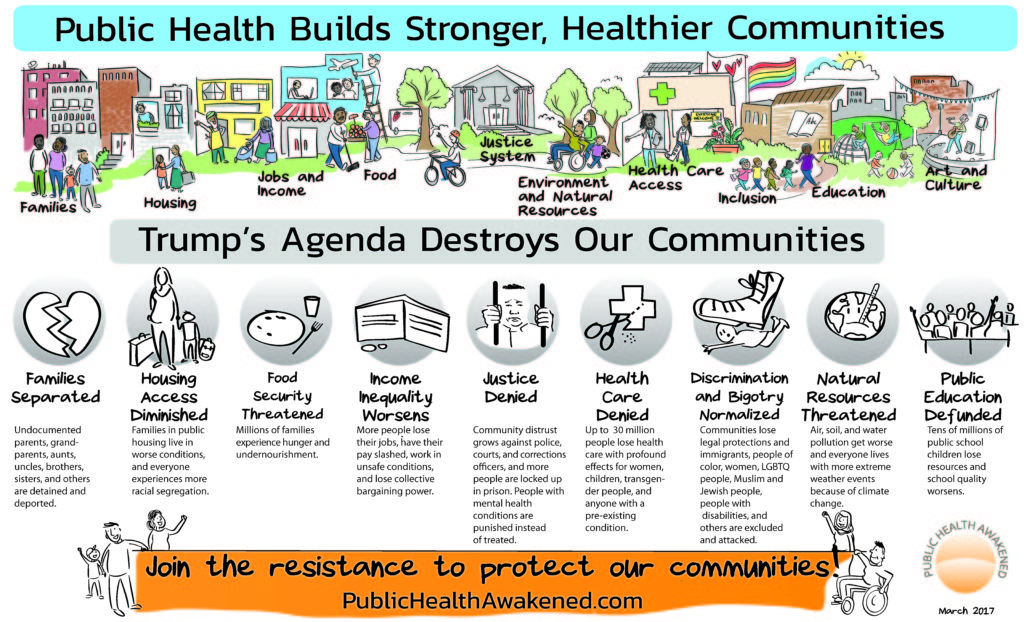 To defend the wealth of crony billionaires, fossil fuel barons, privatizers of prisons and public education, and industries that recklessly exploit workers and ravage the environment, Trump’s budget seeks to 2–6:

Helping bind the foul ingredients of this toxic stew are the Trump Administration’s anti-immigrant, anti-Muslim, anti-abortion, and anti-LGBTQ policies, its overt appeals to white nationalist racism, and its disregard for hate crimes stoked by its hateful rhetoric, and further seasoned by its denial of any aspect of reality that contradicts its own beliefs, no matter how false or distorted.2,3,13–15

The only thing “great” about Trump’s budget is the great destruction it will cause in the US and worldwide.

Trump’s agenda, starkly revealed in his budget, is a clarion blast for action. We in public health cannot fight for just one piece at a time, oblivious to the larger pattern. Rather, we must challenge the big agenda precisely in order to press our claims for the programs, policies, funding, and governance we know is needed for the public’s health and for communities to thrive. Look again at the Public Health Awakened infographic above. We must draw the connections that our bodies make every day: the embodied truths that we see revealed in our health statistics, which show, again and again, how the different forms of social inequality and environmental degradation hurt people’s health simultaneously, and not separately parceled, one exposure at a time.16–18

Hence: as we band together to fight against the Trump Administration budget, we must remember that we fight with allies in all sectors and communities threatened by its priorities.2–6 Sound alternatives exist: consider only the FY 2017 budget proposed by the Congressional Progressive Caucus, aptly titled: “The People’s Budget: Prosperity not Austerity; Invest in America.”19, 20 Consonant with the vision of creating stronger, healthier communities, this alternative budget proposes making “major public investments to rebuild America by fixing our crumbling roads and bridges, improving schools, moving towards clean energy, and creating good paying jobs in the process,” not to mention strengthening voting rights, protecting the environment, and supporting comprehensive immigration reform.19, 20 How does it achieve this? By calling for “strategic investments in areas that fuel job growth and reduce inequality,” “by reducing excessive military spending and enacting smart reforms to health care spending,” and “by progressively raising revenues through implementing tax policy that claws back years of reductions for the corporate sector and very high earners.”20

We must never forget: “another world is possible” — since the point is not only to resist, but to create a better world, with respect for people’s dignity, human rights, and the well-being of this one planet whose fate affects us all.

3. Paarlberg M. Trump’s budget: the dream of a paranoid strongman and a vicious Scrooge. The Guardian, March 16, 2017. https://www.theguardian.com/commentisfree/2017/mar/16/trumps-budget-dream-paranoid-strongman-vicious-scrooge . Accessed: March 18, 2017.