The Misuse of Jails

Most efforts to reform the criminal justice system have focused on state and federal prisons. But a recent report by the Vera Institute of Justice, Incarceration’s Front Door, examines a level of the justice system just as much in need of reform: Jails.

Unlike prisons, jails are locally controlled facilities and were initially designed to house people considered too dangerous to release or at risk of flight pending trial. But the Vera Institute’s research highlights some startling statistics illustrating that they no longer fulfill this mission.

The stark racial disparities that characterize the prison system are also seen in jails. Vera reports that African-Americans are jailed at more than four times the rate of whites. Among other factors, this is a reflection of aggressive policing in African-American neighborhoods, “zero tolerance” suspension policies in schools, and the intersections of race and class that mean African-American men are less likely to be able to post bail than their white counterparts.

Even a short stay in jail increases the likelihood of a longer prison sentence, disrupts families and communities, diminishes economic opportunities, and worsens peoples’ health. In a textbook example of the feedback loops that perpetuate problems, the report says: “Time spent in jail exacerbates already difficult conditions and puts many on a cycle of incarceration from which it is extremely difficult to break free.”

But Incarceration’s Front Door also identifies turning points in a given criminal case where there are opportunities to divert people from jail and connect them to resources that support health and strengthen communities:

The report paints a picture of a convoluted and destructive system, but the authors emphasize that the misuse of jails is neither inevitable nor irreversible. Crafting healthy and equitable policies will require identifying and then acting on the turning points that can fundamentally shift the workings of the system. 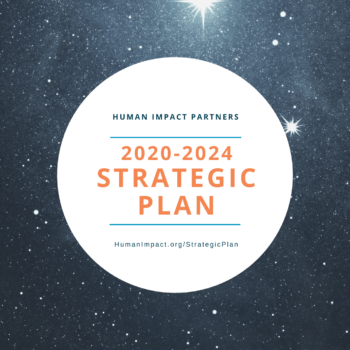 Our North Star Amidst Uncertainty: Announcing the HIP 2020–2024 Strategic Plan

Ready to Imagine Another World