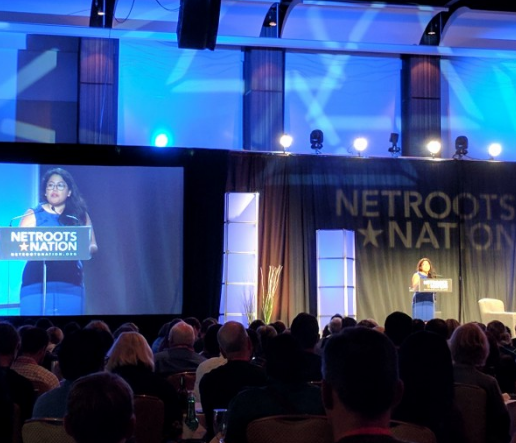 I was lucky enough to attend Netroots Nation earlier this month, representing Human Impact Partners at the largest annual gathering of the progressive movement in the US. The conference was headlined by big names like civil rights activist Dolores Huerta, Senator Elizabeth Warren, and former Vice President Al Gore. More importantly, many of the trainings and sessions were led by up-and-coming organizers, candidates, and strategists with lived experiences across the spectrum of institutional forms of oppression. One other piece of context: It was during my time in Atlanta for this conference that the Charlottesville events took place — adding yet another layer of urgency for racial and social justice. So on a personal level, I came back energized by all the amazing work happening around the country (yes, even with Charlottesville front and center) and ready to double down against hate.

Here are a couple of highlights from my time at Netroots, with a deeper dive into just a few of the health equity connections to be made:

On immigration: defending DACA is just the beginning

As a Mexican American who was first brought here by my parents at age 3, I most identified with the young, proud voices of Pamela Chomba and Adrian Reyna from United We Dream calling on all Netroots Nation attendees to stand with immigrants to defend DACA.

Hearing about the anxiety, trauma, and complete uncertainty of their livelihood in the United States was heartening because in the face of it all, they resist and press on. Yet we all know that defending DACA is just one of many steps. The reality is that with 11 million undocumented immigrants living in the US, many families are composed of kids who were born in the US and whose parents are the ones at risk of deportation.

To lift up the public health layer to this issue, here’s some data on the health impacts if deportations stayed consistent with what we were seeing back in 2012. In other words, these estimates — all based on Obama-era deportation levels — will likely be much, much higher given the new regime and stepped up interior enforcement we’re seeing. These numbers come from our Family Unity, Family Health report.

On protecting the education, health, and well-being of kids of color

As a parent of 2 children of color (shout out to my beautiful Mexican + Korean/Chinese babies!), I was deeply moved by the super-important work happening at the local and national level to eliminate racial inequities in education as showcased on the panel, “Let Her Learn: Understanding and Dismantling the School-to-Prison Pipeline for Girls of Color.” A helpful toolkitwas handed out at the session, too.

Some highlights from the panelist discussion include:

This panel threaded so well with our own Health Instead of Punishment Program (or as we call it in-house, HIP2). A high-priority goal of our HIP2 work is to advance an alternative vision for our criminal justice system — one that places health and well-being at the center of policy and practice. Another goal is to activate health professionals to use their voice, power, and resources to engage in criminal justice reform efforts.

If you’re in a public health agency or organization and curious to learn more about how your work already relates to criminal justice reform and/or immigration and ways you can plug in, shoot us an email at info@humanimpact.org.

Check out the Twitter hashtag #NN17 to read more notes and experiences from the conference.