I was 15, and I turned my life around

This post is part of our Human Impact Stories Series (HISS!), where we thread together the narratives of folks’ experiences with the institutional practices and policies that greatly determine health. 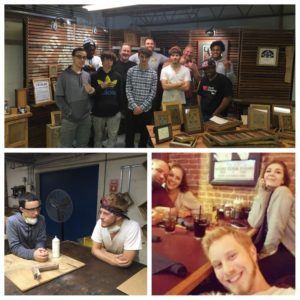 I had the pleasure of interviewing Andrew Kruszewski for our research report evaluating the health and equity impacts of charging 17-year-olds in juvenile court rather than in adult court. Andrew was also on the Advisory Committee guiding HIP’s research process. The purpose of this work is to inform legislation in Michigan that would raise the age of juvenile court jurisdiction from 17 to 18 years of age.

Michigan is 1 of only 5 states that still automatically try 17-year-olds as adults in criminal court.

Andrew wrote the story below about his experience at a county juvenile detention center in Michigan, and about his gratitude for happening to be under the age of 17 when he was arrested . If he had been 17, he would have been considered an adult by Michigan’s Department of Corrections.

Thank you, Andrew, for sharing your experience!

I was 14 when I began a short-lived spree of crimes. I live in Ypsilanti, MI, and at the age of 12 marijuana had become a huge factor in my life. So much so that the use of it had consumed me, as well as alcohol and prescription meds. They had not directly damaged my life yet, but they did influence and alter my mindset.

Throughout my criminal life, I had been shot at, robbed, threatened, blackmailed, and extorted. Mostly at the school I had went to I was in a harmed position, and while on probation I could not defend myself physically, and the adults did nothing to intervene or stop what had been happening.

When I was 15, I dropped out of high school and progressed in criminality. I remember being so full of anger and sadness, I didn’t know much or even want happiness.

The night of November 17, 2015, (now my sobriety date) was the night everything changed. After being arrested for the crimes above, I was sentenced to the Washtenaw County Juvenile Detention until further notice. I was drug screened about a month in and tested positive for prescription meds and marijuana, and was transferred to the True North Juvenile Drug Treatment Program on the other side of the detention building.

I spent a total of eight months and 28 days in the Growth Works Placement for Adolescents.

While there, I was given the support of Education through Washtenaw Intermediate School District. They have therapeutic approaches of emotional outlet and support through Growth Works with five intensive in- and out-patient therapists. Discipline through what the detention center had offered with counselors and teachers, (many of whom I credit with helping me become who I am today). There were multiple group meetings a day to express how we felt, what recovery topic (acceptance, patience, resentment, surrendering, etc.) we were working on and what we were struggling with mentally and emotionally. Everything I experienced in there and before then is a past I do not want to relive, and I am striving for a better me, with a faith that often changes, but never shaken in myself and others.

What I believed in, when I was younger, was changed after the time spent in treatment. It changed my life, and I am so grateful for what they at the detention center and treatment offered me. And it took a long time before I realized that I wanted to live and be happy.

I know that these services are likely not offered in other Juvenile Detentions, much less prisons, where many people my age, then and now, will be spending long periods of time, some even life. I feel saddened by that. My resolve on this topic is to give back to the community that gave me hope when mine was lost, and to do what I can for those in similar positions.

Kids should be able to have a chance at life instead of losing it over a mistake.

I know I have made mistakes, but time and wisdom have shown me that I have, and that I can make up for them. I wish others had the chances and the time to develop a wisdom that shows them that.

Andrew is now 17 years old, has earned his GED, and has a full-time job with Urban Ashes, a carpentry and woodworking company that hires people with felony records and marginalized youth.

He’s also part of the Michigan Juvenile Justice Youth Advisory Board, a group of young people who aim to transform the juvenile justice system through working with local and state agencies and community members while leveraging the voices of those who are the most impacted.

Along with other members of the Youth Advisory Board, Andrew gave public testimony at a meeting of the Washtenaw County Commissioners on November 15, 2017 to promote a resolution urging the Michigan Legislature to pass Raise the Age legislation along with a package of other bills all aimed at keeping youth out of the adult criminal justice system. The resolution passed unanimously.

As Andrew stated, all kids deserve the opportunity to lead healthy, productive lives. Andrew’s experiences are in line with the conclusions of our research report on Raising the Age in Michigan — Michigan’s juvenile justice system is a better place for young people because it prioritizes treatment, rehabilitation, education, and other resources that impact health.

On the other hand, youth detained in adult facilities are significantly more likely to be beaten by staff, sexually assaulted, and commit suicide than youth in the juvenile justice system. Moreover, experiencing incarceration is damaging to kids’ mental and physical health throughout their lives.

It’s time for the State of Michigan to follow the lead of other states and Raise the Age!

The Michigan Legislature is currently considering a bi-partisan package of bills that aim to reduce the number of youth who are convicted as adults in Michigan’s criminal justice system. Within that bi-partisan package is legislation that would raise the age of Michigan’s juvenile jurisdiction from 17 to 18.

Get Involved: Contact Elena Brennan at ebrennan@miccd.org for more information on how to add your voice to the campaign.