Changing the ‘tough on crime’ narrative 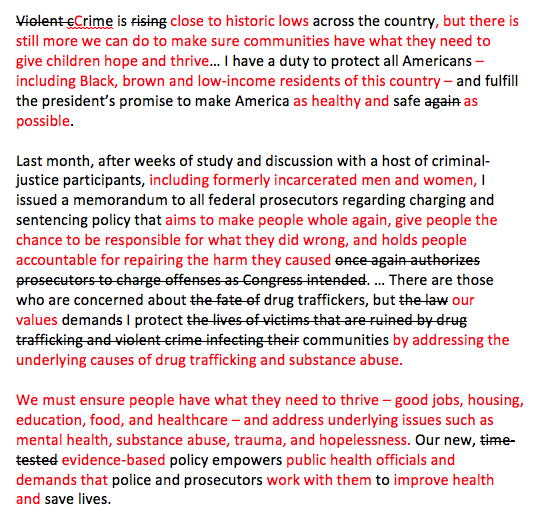 Instead, every day, we are bombarded with a particular ‘tough on crime’ narrative: our leaders and the media telling us that crime is rising and that the only solution is being tougher on crime. These messages fit into and reinforce a narrative and worldview about the criminal justice system that is shared by most residents of this country. That narrative and worldview limit what’s possible in terms of breaking down the current system that we know is so inequitable and unhealthy.

If we want to overhaul the current justice system and not just nibble around the edges, we need to replace the story most people are telling (and thinking!) about justice. Studies show that when people are presented with data that doesn’t match their worldview, they simply dismiss the data. There is already so much research out there about how the justice system is failing. My roots are in research, but I’ve learned that heaping on even more data is not going to convince someone with a different worldview that they should abandon tough on crime policies.

So we need people to understand and believe in a more aspirational, transformational narrative. A workgroup of the National Criminal Justice and Public Health Alliance, which HIP leads, has started to do just that. Over the last two years, a group of about 20 of us have begun to articulate both what the current narrative is and what a transformational narrative — one that centers on community health — could be.

Here is an abbreviated version of the transformational narrative that we want to lift up — a story that focuses on public health values and principles:

The justice system must perform by our societal ideals: valuing every life, showing compassion and forgiveness, and restoring hope.

Society needs to address the underlying causes of behaviors we deem inappropriate and of poor health. We must ensure people have what they need to thrive — good jobs, housing, education, food, and healthcare — and address underlying issues such as mental health, substance abuse, trauma, and hopelessness. The justice system must place on society the collective responsibility to create these conditions.

To improve safety and health, the justice system must make people whole again. It must give people the chance to be responsible for what they did wrong and accountable for repairing the harm they caused.

We believe all people are fully human and deserving of dignity and fairness.

This justice system is within our reach. Law enforcement, district attorneys, probation officers, elected officials, school administrators, and others can choose to adopt existing programs and practices that embody this vision. These programs have been evaluated and shown to work — they improve community safety, strengthen families and communities, heal, and end the cycle of violence and trauma.

We must recognize that all of us — people of color and Whites; people of all incomes; individuals, families, and communities; those who administer the justice system and those who are under its influence — would be better off if everyone was supported in reaching their full human potential. We can only reach our societal goals — safety, health, or other — when we create this justice system.

Ok, we know this is not perfect yet, but we hope it’s a good start. We’ll continue to refine it, so send me your feedback.

We also articulated the current narrative to understand what we are up against. An abbreviated version of the “tough on crime” narrative goes something like this [and just to be absolutely clear, what is written below is NOT what we believe, but rather what others believe and/or are being told! And be forewarned, it is RACIST and UGLY!]:

Not all of this — especially the racial component — is explicitly said. In fact, most of the time it is only implied/inferred. But in the era of Trump, more and more is being said explicitly.

This narrative has shifted a bit recently for some. “Smart on crime” advocates believe most of the above, but think that the financial cost of our current justice system is unsustainable. They’d say that the government shouldn’t be spending all this money on incarceration; some offenses, like drug use — for some mostly White populations — may be addressed through other means.

So that is what we are up against. Like I said, it’s ugly.

We’re now hoping to use the transformational narrative we developed to create and test messages for several criminal justice campaigns. And because the process of thinking through the current and transformational narratives was so eye opening and informative, the narrative workgroup is going to create a tool that will help others do something similar locally. We’ll let you know when that is ready and what we learn!

This blog post was written by Jonathan Heller, Co-Founder and Co-Director of Human Impact Partners.