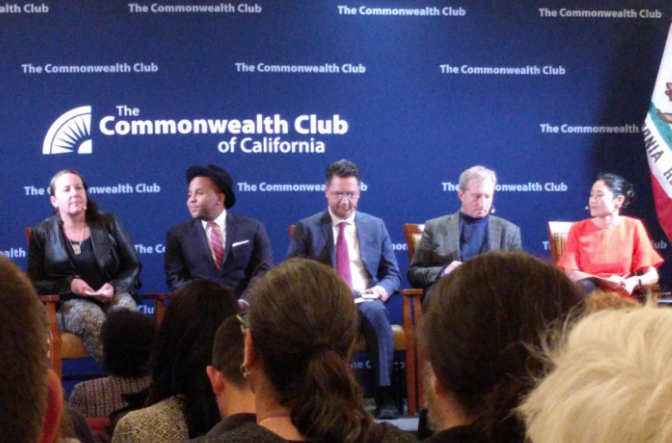 “What can I do?” It’s the question we at Human Impact Partners are asking ourselves, each other, and pretty much anyone who will discuss it — and one that we hear swirling in the streets during these post-inauguration days.

A powerhouse panel took on this question at a recent Commonwealth Club event in San Francisco, titled “Movement Leaders on Civil Rights in an Uncivil Time.”

The diverse minds that night included Lariza Dugan Cuadra of Carecen SF, Rashad Robinson of the Color of Change, Abdi Soltani of the ACLU of Northern California, Tom Steyer of NextGen Climate, and moderator / KQED host and anchor Mina Kim.

Here are salient points from the conversation that we pass along and adapt for fellow health-loving folks also searching for answers to what they can do. The list starts broadly, then hones in on actions specifically for public health.

1) First take a step back, and recognize what is going on today.

Currently, there is a broad-based undermining of fundamental rights in the US — the right to vote, to a free press, and to decisions based on scientific fact, for example. It is an undoing of what people of this country and some of their ancestors have struggled over centuries to create. This undermining of rights will affect our health. To that end, stay tuned for resources in the works by Public Health Awakened about what the 100 Days Plan means for health.

2) The way out is not the way we got here, to paraphrase Rashad Robinson.

We need change. What does that change look like? Panelists described it as activism between elections. Activism now. For public health folks the word “activism” can sometimes be iffy. In my work life, one way I interpret that is in advocating for health.

Change also means building even more people-centered movements, and grassroots activity with constant face-to-face interactions starting now, not just 2 weeks before an election, as panelist described. It means showing our values and who we are in a visceral way. And it means holding the instigators — and enablers — of harmful policies accountable. Recent focus has centered on actions by the highest office of this nation. But panelists emphasized that there are actions at other levels that shape our day-to-day lives. That means an opportunity to reach out to and hold accountable Senators, members of the House, and governors, as well as district attorneys, for example.

3) So, how do we interpret this specifically for health? What can public health do?

Identify 1 action to take today in support of public health. For example, if you’re interested in a specific issue, find out one organization working on that topic and how to get involved. For example, there is work quickly coming together on topics like immigration ,including a resource put together about 9 actions health departments can take to support immigrant rights. If that’s an area of interest for you, find 1 action from the guide that you can take. If a different interest area speaks more strongly to you, see if a group already exists and reach out to that group working to protect and promote health in the years to come. If that group doesn’t exist, talk with friends, colleagues, social media contacts, or other circles about how to help start it.

Call, write, or visit leaders to make clear there is a need to protect health. Elected officials respond to constituent concerns. We in public health have the added bonus of being able to bring sound evidence to leaders. We have a responsibility to continue to do that. Even if working in a city or state where you believe the Congressperson, district attorney, etc is already interested in protecting health, there is value in reaching out — you can ask if they are publicly stating that position or what actions they are taking to bolster it.

Get informed. As policy changes are rapidly proposed, it’s important to stay current. Whether it’s about local, state, or national issues, we need to know what’s going on to figure out how to respond in support of health and health equity, or how to act proactively before the next event.

Pace ourselves. We should prep for the marathon, not the sprint. It starts now, and continues for years. Self-care will be critical to sustaining ourselves over time. Set the expectation of yourself that you can’t show up for every event. But go when you can. It not only cues elected officials and decision-makers, but shows support to the people most immediately affected by recent decisions.

Identify and practice saying what we in public health are for. And repeat it over and over again. Speakers at the event described a need for a bigger vision. We in public health can show that what we are trying to protect is fundamental to American values, and can communicate an optimistic, clean view for how the US should support health. It’s about saying what we are for instead of what we’re against.

Taking a step toward saying what we are for, here’s a go at it for Human Impact Partners.

We’re for keeping families unified. We’re for supporting a lifelong course of rehabilitation instead of confinement. We’re for rights to a safe and healthy workplace, and the ability to fight without penalty for those conditions when employers fail to provide them. We’re for a right to medical care coverage, regardless of age, health, or existing conditions. We’re for fairness, tolerance, and acceptance of our neighbors who immigrated more recently than we did. We’re for equity. We’re for health.

And we’re for getting to say all of this without fear for safety or livelihood — saying it at the ballot box and between elections. Because to paraphrase Tom Steyer from the event, voting is a part of democracy, and this kind of advocacy for health is patriotism.

As he added: Our backs are against a wall. If we are not showing up now, when are we?

Want to get involved? Join Public Health Awakened, an emerging movement organizing for health, equity, and justice — formed in response to the Trump administration.